I am currently going through a difficult time… I was recently informed that my Dad, which I call Papi, may be in his death bed now. He has been living in a nursing home and was not eating well.. His potassium level was elevated . He was rushed to the hospital. Now his kidneys are failing and is dehydrated and the doctors gave him a 15-20% chance of survival .

This is hard . I’ve never had anyone so close to me in the process of dying . It’s incredible the amount of emotional pain this brings. Although I’ve not seen him for many years , it still hurts a lot . I have my moments of calm and serenity , but then there are the other moments of pure sorrow and grief. I think about the few times we spent together and the things I learned from him. It wasn’t much actually , since my parents were separated and then divorced most of my life. But it still causes a great deal of sadness not being able to see him like he once was.

So now I’m waiting. Waiting for some news about his recovery or his departure. It is torture is some way. But I feel confident that he will be in a peaceful place now.

Update: I received the dreadful news that Papi passed away… I’m distraught . I have crying spells . Can’t concentrate half of the time. But I’m doing ok. Sometimes I wonder if this is a test. An accident. Or a teaching moment.

I just attended his funeral and burial. It’s hard to see my brothers and mom crying. It is a moment I’m never forgetting. Wish I could’ve spent more time with Papi. I feel I did not get to know him . Life’s circumstances prevented me from seeing him more often. He wasn’t part of most of my life .

Yet I miss him and wish I could have at least say goodbye to him. 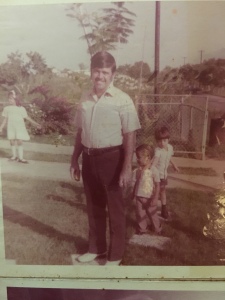