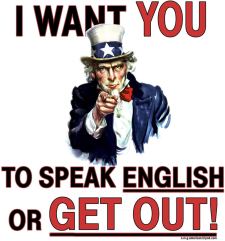 So what if people don’t speak English while in the United States?  Would that make them less welcoming and not deserving to live in this country?   I have a big problem with people glorifying aspects of their culture, specifically the dominant language.   If you have seen my recent posts, you probably noticed how disturbed I feel with all the political propaganda that regards the United States as exceptional and unique.  I must say, United States is not exceptional (and the US is not the only “America” either).  I recognize that this statement may offend some readers.  But the simple fact that I am posting this post should indicate that I don’t care if people choose to feel offended. Please click the following links regarding discussions about a candidate speaking a language other than English in the political arena:

I assume that those who hold an egotistical and superior image about their “American” culture would probably agree with these discussions.  They probably agree with the statement that English is  “kind of a unifying aspect of the nation …. that is understood by all.” The language that is understood by all is not a specific uttered speech, but the meaning behind it, such as love and compassion.   For example, should Bibles be written only in English for it to be effective in sending a message in the United States?  Is English the only language that would make every family functional?  Yes, it is the dominant language and it is a great asset when looking for a job… but it is not the only language.

What really unifies a nation is a common goal for peace, improved economy, equality, and affordable insurance. Not a language.

Why are some people so afraid of accepting the diversity that makes this country truly great?